The Power Of Persistence

The Power of Persistence

Around the time that I was in the 4th grade I decided I would become an attorney when I grew up.  I even knew what kind of attorney I planned on being: a District Attorney that prosecuted people that abused children, murderers, and batterers.  Even at that age I wanted to protect other children and help make the world a better place.

And it didn't end at just being an attorney.  I wanted my career to lead to being a Judge, then perhaps a Senator, so I could help change laws.

I was so serious about this that I began wearing Harvard t-shirts and sweatshirts that were way too big. Why Harvard?  Because I knew it had one of the best Law Schools in America and I was determined I would end up there.  I think I read about it in an article in my dad's subscription to "Reader's Digest".  Yes, I was reading "Reader's Digest" in elementary school.  Please feel free to laugh.

I think the funniest and most memorable example of the mini-lawyer in me was when my older brother and I were grounded for some shenangians that I maintained were neither my doing nor my idea.  So, naturally, I did what any kid would do.  I wrote a speech.  An argument like an attorney would present a jury.  Then I showed up at the dinner table, speech in hand, and proceeded with my best Atticus Finch impression.  And it worked.

When I was in high school, I had already survived a tremendous amount of adversity.  Most of my close family and almost none of my friends knew what I had gone through.  And you would have never known either if you had met me back then.  I was almost always laughing, smiling, and in general a very happy out-going teenager.

I guess you could say I had become a bit of a pro at hiding pain at a very young age.  I wanted to protect myself from being judged, from gossip, and from what I assumed would be a general lack of understanding. I thought, wrongly, that I was the only person with a history of child abuse.  I was too young to know the statistics.

So I gritted my teeth and focused as much as I could on getting to college.  And I held onto that throughout elementary, middle, and high school.  I truly believed education was my ticket to a better life. I held onto this persistence that I would go to college no matter what happened or how my grades suffered.

Finally my senior year rolled around, a tiny miracle in itself, and applications to colleges were sent out.  My overall high school GPA was, to say the least, not impressive.  I was in advanced placement classes and maintained good grades in my favorite subject, English, but the rest was a mess.  So I nervously awaited the decision envelopes to arrive.  The college I most wanted to attend (which was no longer Harvard because that was no longer an option) sent me the dreaded rejection letter.  I cried.  And then another rejection letter arrived, followed by another.

But my mantra of "just make it to college, just make it to college" was not about to let me quit.  I made an appointment with the Admissions Office at one of the colleges and went to meet with them in person.  I looked them in the eyes, told them a little about myself and my life, and explained why my overall GPA should not keep me from a college education.  I braced myself for his response.  He smiled and I inhaled a little breath of hope.  And that following August I was settling into my dorm room. 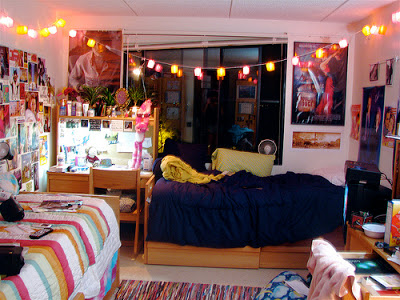 College was not exactly smooth sailing as I had hoped.  But when does anything turn out the way you plan it?  In a Huffington Post article written by Michael M. Crow, President of Arizona State University and Howard Schultz, CEO of Starbucks this point is elaborated:  “They seem like they are on the right track -- dreaming of the future even as they fret over their new roommates and class schedules.”  And it’s true, for me everything seemed to be right on track.  But, like any life, I was thrown off track more than once.  In my first year at college I entered into a seriously abusive relationship which led to broken bones and a very broken heart.  And again my GPA suffered.

I went to visit a Dean once and I remember her telling me that I "would never Graduate and might as well go ahead and drop out".  This was echoed by a few others and even I began to wonder if I should give up on my dream of a college degree.  But I thought back to all I had endured, how much that degree meant to me, and how much I would love to prove those people wrong.

And persistence yet again won over.  With quite a bit of effort my GPA began to rise and before I knew it I was ready to graduate. 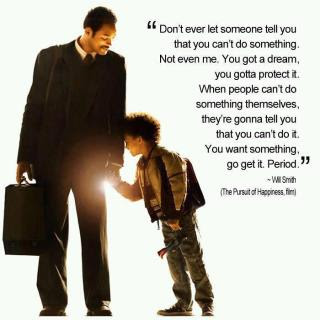 (Photo credit and quote from the movie “The Pursuit of Happyness”)

The day I graduated college I was truly in disbelief at what I had accomplished and overwhelmed with gratitude for the often overlooked gift of persistence.  There are many other situations in life that require the need for persistence.  This is just one example in my life about not giving up when I had an endless list of reasons why I should.

Whatever it is that you want in your life, no matter how many times you have been rejected and told to give up, put those rejection letters in a paper shredder and use the pieces as fuel to remind yourself that you can. Choose to wield the power of persistence.  I never went to law school.  But anytime I think I can’t do something I look up at that college diploma on my wall.  It’s a monument to persistence and the little girl that never gave up.  Here’s to you creating your own.

Do you have any stories about persistence or needing to find it?  It can be in the survival of any trauma or difficult situation or in personal goals like weight loss.   Please share with us in the comment section below. We’d love to hear from you!